Does blockchain optimize online payments? Blockchain technology has taken the world by storm since its invention in 2008. The finance world has been the biggest industry to benefit. The entire cryptocurrency market cap is at a stunning all-time high of nearly $2.5 trillion. By now, the popular Bitcoin cryptocurrency is accepted by big names including Microsoft, AT&T, and, oddly enough, even the Miami Dolphins.

The tech is taking over because it encodes data within a digital ledger that logs every transaction and can not be faked or modified. When used as a currency, blockchain and decentralized ledger technology (DLT) stops counterfeiting without the need for central administrators like financial institutions.

But is the technology improving traditional payment methods or is on its way to replacing them entirely? And what drawbacks could we see from a world of cryptocurrency payments?

The big benefit of blockchain tech is cutting out the middleman. Banks were traditionally needed to administer and verify transactions. With blockchain, they are unnecessary to complete a transaction. Blockchain-powered payments could be both faster and come with lower fees than payments including banks. And cutting out banks is a pretty big disruption for the world of payments.

Cutting out the middleman from the payment process offers faster and cheaper transaction methods. However, banks offer additional layer of security. They are usually regulated and supervised by multiple set of rules and associations. While Blockchain also offer security of payments, integrity of payments is another thing. Without the middleman blockchain payments can be prone to illegal activities also. Banks for traditional payment methods protects the international online payment environment from criminal activities, while protecting interests of merchants and customers.

The industry is taking these news seriously: 90% of the European Payments Council’s members believe that blockchain tech will “fundamentally change the industry by 2025”, according to a CBInsights report. Up until now, banks have not had any incentive to lower their transaction fees, which has set the industry up for disruption. Cross-border transactions accounted for $224 billion in payments revenues in 2019 alone, so there’s a lot on the line.

So, bitcoin is fast, cheap, and effective. But is it better than the payment methods we already use? 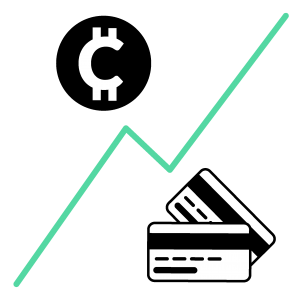 Bitcoin payments come with one core disadvantage for users. Unlike credit card payments, cryptocurrency transactions can not be cancelled or refunded. This puts customers at a greater risk of losing their money due to fraudulent transactions or theft, and the impact can be big. One scammer even claims to have stolen $1 million over 14 months through phishing attacks.

In addition, the tertiary benefits of credit or debit cards — reward programs. The ability to borrow money, and widespread integration with other services —  w

ill be lost to bitcoin devotees. On the other hand, so would the problems that come with cards. Like late fees, negative credit score impacts, or extra charges for international payments.

One final downside to the technology is its environmental impact: Bitcoin’s total annualized carbon footprint is 68.98 Mt CO2, which is around the equivalent of the country of Israel’s carbon output. That power consumption will continue to grow as the value of bitcoin rises due to greater adaptation.

In 2015, a single bitcoin transaction used power equal to 1.5 days of the average American household’s electricity usage. That’s already a lot, but today, the same transaction has ballooned to the power consumption of an average U.S. household over 60 days. Given this power usage to transaction ratio, bitcoin would simply be unsustainable as the core of our whole financial system.

Blockchain is here to stay, but won’t take over

Even if it will never take over the entire financial system, the technology is rapidly becoming a meaningful component of it. Total blockchain spending around the world is expected to pass $6.6 billion in 2021 alone. Global spending is forecasted to hit almost $19 billion by 2024, as well, and Gartner’s estimates put the total business value-add of blockchain at a massive $3.1 trillion by the time 2030 rolls around.

Their potential for disrupting payments is exactly why banks and retailers are increasingly interested in owning stock in crypto startups or learning how to accept them as payment. By getting in early, banks can hedge their bets and get a piece of a growing industry. Small business owners can also accept bitcoin with the right service — some startups are helping retailers,  by offering cryptocurrency transaction method integrations for ecommerce platforms including Shopify and WooCommerce.

While blockchain optimize online payments for certain factors including speed and ease of use, they come with some downsides for consumers. Such as the inability to get refunds, as well as a downside for the financial infrastructure, in the form of unsustainable power usage. Blockchain won’t be going away any time soon, but it won’t be turning the financial system completely on its ear, either.

Adam is a writer at Tech.co and has worked as a tech writer, blogger and copy editor for more than a decade. He’s also a Forbes Contributor on the publishing industry, for which he was named a Digital Book World 2018 award finalist. His work has appeared in publications including Popular Mechanics and IDG Connect, and he has an art history book on 1970s sci-fi coming out from Abrams Books in 2022. In the meantime, he’s hunting own the latest news on VPNs, POS systems, and the future of tech.

We use cookies and other tracking technologies to improve your browsing experience on our website, to show you personalized content and targeted ads, to analyze our website traffic, and to understand where our visitors are coming from. Read More >>
Cookie SettingsAccept All
Manage consent

This website uses cookies to improve your experience while you navigate through the website. Out of these, the cookies that are categorized as necessary are stored on your browser as they are essential for the working of basic functionalities of the website. We also use third-party cookies that help us analyze and understand how you use this website. These cookies will be stored in your browser only with your consent. You also have the option to opt-out of these cookies. But opting out of some of these cookies may affect your browsing experience.
Necessary Always Enabled
Necessary cookies are absolutely essential for the website to function properly. These cookies ensure basic functionalities and security features of the website, anonymously.
Functional
Functional cookies help to perform certain functionalities like sharing the content of the website on social media platforms, collect feedbacks, and other third-party features.
Performance
Performance cookies are used to understand and analyze the key performance indexes of the website which helps in delivering a better user experience for the visitors.
Analytics
Analytical cookies are used to understand how visitors interact with the website. These cookies help provide information on metrics the number of visitors, bounce rate, traffic source, etc.
Advertisement
Advertisement cookies are used to provide visitors with relevant ads and marketing campaigns. These cookies track visitors across websites and collect information to provide customized ads.
Others
Other uncategorized cookies are those that are being analyzed and have not been classified into a category as yet.
SAVE & ACCEPT